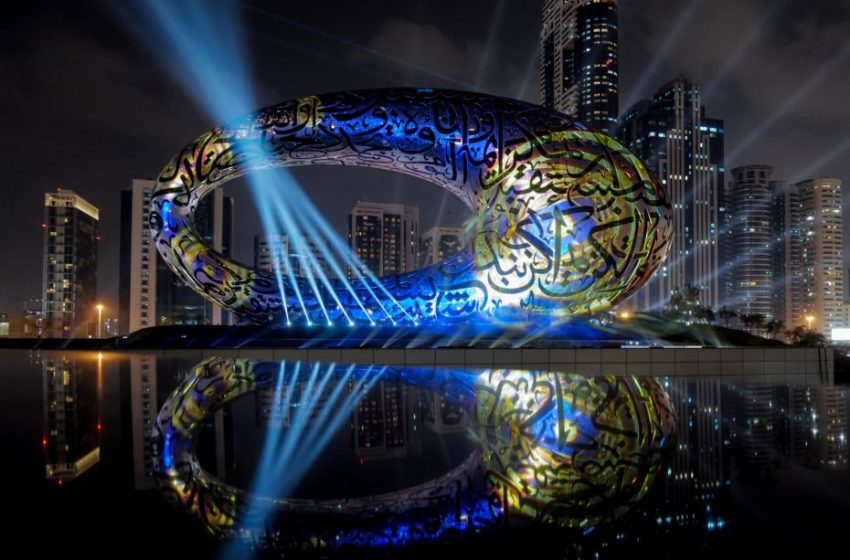 Sheikh Mohammed bin Rashid Al Maktoum, Vice President and Prime Minister of the UAE and Ruler of Dubai, inaugurated the much-awaited Museum of the Future (MoTF) on Tuesday evening.

The 77-metre tall iconic landmark will provide the largest platform in the region to study, envision and design the future, helping convene talents from across science, technology, research and innovation verticals.

The opening ceremony featured several videos highlighting the concept of the Museum of the Future and the vision of Sheikh Mohammed to transform Dubai into the most developed city in the world.

In his address, Sheikh Mohammed said: “The (MoTF) is a message of hope, a global scientific platform, and an integrated institutional framework to shape a better future for all of us. The museum will be a forum for great minds, scientists, thinkers and experts from around the world.”

From an architectural standpoint, it is the most streamlined building in the world with no sharp corners on its external structure. It was constructed using the ‘parametric design’ model, a three-dimensional technology based on advanced technical design that works by entering data and parameters for the building to be designed.

The stainless-steel façade of the museum consists of 1,024 panels over an area of 17,600 sq m. The panels were produced using automated robotic arms, with each panel consisting of four layers, and requiring a 16-step process to produce. Each panel was installed individually, with the installation period for the external façade lasting more than 18 months, according to Emirates News Agency WAM.

The façade of the MoTF is illuminated by 14,000 m of light lines and is decorated with quotes from Sheikh Mohammed’s poetry in Arabic calligraphy, making it the only building in the world whose entire façade is adorned using the art of calligraphy. Emirati artist Mattar bin Lahej designed the sayings of Sheikh Mohammed, the “Thuluth” script, reflecting nobility, originality and permanence.

The museum will present a clear roadmap for Dubai and the UAE’s future. It aims to curate a network of partnerships with major scientific and research institutions and centres in the world in order to host and promote in-depth dialogues about future trends shaping economic, scientific, technological and humanitarian sectors.

Sheikh Hamdan bin Mohammed bin Rashid Al Maktoum, Crown Prince of Dubai and Chairman of the Board of Trustees at Dubai Future Foundation, said: “The MoTF will be an intellectual laboratory for cities of the future and governments of the future. It will play a key role in strengthening Dubai’s future position.”

The MoTF consists of three main elements: the hill or plateau from which the building rise, the external design of the building, and the exhibitions of the museum.

The museum employs the latest technologies in virtual and augmented reality, big data analysis, artificial intelligence and human machine interaction to answer many questions related to the future of humanity, cities, societies and life on Earth.

A multi-use hall accommodates more than 1,000 people whose sections include a special space for interactive lectures and workshops with a capacity for 345 people. It also includes innovation laboratories for health, education, smart cities, energy and transportation and a permanent museum of future innovations.

Sheikh Maktoum bin Mohammed bin Rashid Al Maktoum, Deputy Ruler of Dubai, Deputy Prime Minister and Minister of Finance, said: “We seek to accelerate the transition towards a knowledge-based economy in the region and explore practical scientific solutions to the greatest challenges of our times, both today and tomorrow.”

The Motf takes its visitors on an experiential journey, transporting them to the year 2071, which will mark the UAE’s 100th year as a sovereign and federal state. The voyage takes visitors from a universal to a personal realm, based on an approach that emphasises the importance of one’s connection to the universe and promotes the principle of each individual’s role in shaping the future.