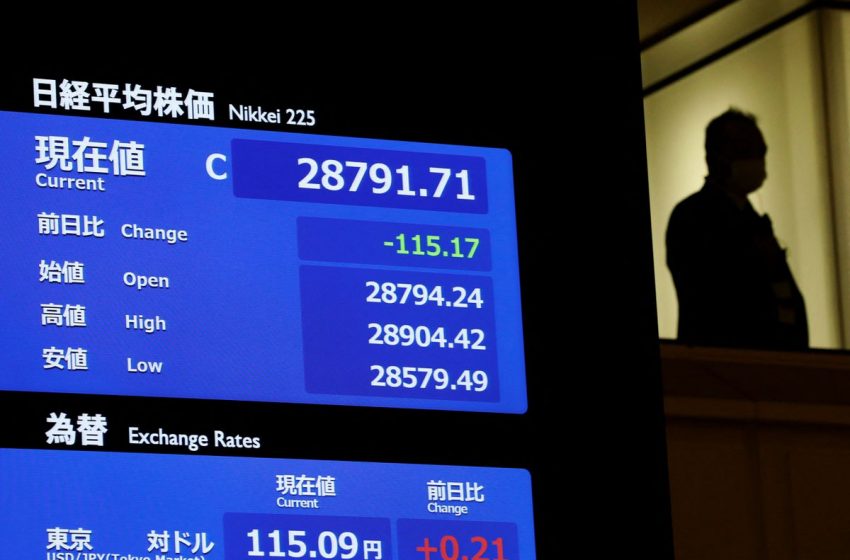 A screen shows Nikkei index after a ceremony marking the end of trading in 2021 at the Tokyo Stock Exchange (TSE) in Tokyo, Japan December 30, 2021. REUTERS/Kim Kyung-Hoon

LONDON/HONG KONG, Jan 4 (Reuters) – World shares extended on Tuesday their positive start to 2022 with markets from Europe to Asia shrugging off worries the Omicron coronavirus variant could choke the global economic recovery, while the dollar rose after U.S. bond yields jumped.

“The chief reason behind the return of investor confidence is Omicron,” said Jeffrey Halley, an analyst at Oanda.

“Yes, the virus variant is much more contagious, but it is not leading to a proportionally larger number of hospital admissions… (so) it won’t stop the global economic recovery.”

Wall Street was also set for gains after closing a day earlier at record highs, with e-mini futures for the S&P 500 index 0.2% higher.

The U.S. dollar rose to its highest since 2017 against the Japanese yen after U.S. Treasury yields jumped on Monday as traders bet on an early Federal Reserve interest rate hike to tame fast-rising inflation.

In a sign that economies may weather the spread of Omicron, factory activity in Asia grew in December, suggesting the direct hit from the variant on output appeared subdued. read more

Asian stocks were on the front foot following Wall Street’s record highs on its first trading day of 2022, with MSCI’s gauge of Asia Pacific stocks outside Japan (.MIAPJ0000PUS) notching up gains of 0.5%.

Analysts said the gains for stocks reflected in part optimism over prospects for the U.S. economy.

“We are firmly of the view the U.S. is seeing boom conditions and a very tight labour market which will boost household incomes,” said John Milroy, an Ord Minnett advisor in Sydney.

Benchmark U.S. 10-year yields leapt 12.5 basis points on Monday to touch 1.6420% for the first time since Nov. 24, as investors bet on a series of interest rate raises this year to combat rising inflation. read more

Money markets have fully priced in a first U.S. rate increase by May, and two more by the end of 2022.

That pushed the dollar to as high as 115.82 yen for the first time in four years.

The dollar index , which measures its performance against the yen and five other major currencies, held close to the one-week high of 96.328 reached a day earlier.

Commodity markets also were back in the swing of things after their nearly two-year resurgence to close out 2021, though oil gave up most of its earlier gains.

Brent crude futures were up 0.1% at $79.05 a barrel at 0810 GMT, as investors embraced expectations that major oil producers will confirm a plan to add supply. read more Reporting by Tom Wilson in London and Kane Wu in Hong Kong; Editing by Sam Holmes, Shri Navaratnam and Tomasz Janowski